skip to main | skip to sidebar

ENTER THE BEARD, THE TEASER from Matt Lawrence on Vimeo. 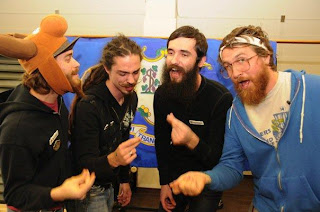 Beards – God’s crowning achievement in the design of man. A litmus test for one’s own virility and machismo. A veritable sea of fuzz hanging just below the nostrils. And it was in the Spring of 2009 in Anchorage, Alaska, that over 250 men from all over the globe competed in The World Beard and Mustache Championships. One such man, Charles Parker Newton, documented his quest - a quest to gain knowledge of and compete alongside the follicle elite. Join Parker on his journey as he navigates through the hirsute – ENTER THE BEARD.
Posted by TwoPintsLighter at 10:21 PM

“ENTER THE BEARD”
A YOUNGBULL PRODUCTION